In the ever-changing market, a business group yearning for more profit opportunities must establish a flexible operation management system. Especially for service-oriented businesses, a highly responsive system is key to meeting clients’ needs in time. With this said, establishing a Two Tier ERP system catering to the management of new business bodies or overseas subsidiaries is undoubtedly the best choice. 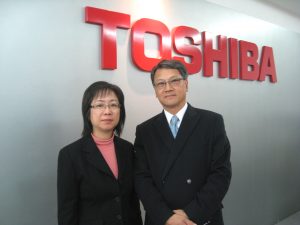 Established in 1875, Toshiba has endured challenges of over a century and now perches firmly on the top of the industry as Japan’s largest semiconductor producer and the second largest general electronic machinery producer, with businesses reaching the seven continents and five oceans across the world.

Toshiba owns numerous subsidiary business bodies, each with various missions, and adapts to local languages, currencies, tax and legal regulations. Operating within such a complex context, applying the headquarters’ large-scale ERP to the entire business will be costly, time-consuming and prone to inappropriate interpretation of applicability, missing the real needs of each business body. Despite that some subsidiaries already have their own operation management systems, they may have gone obsolete throughout the years and become a source of limitations and inconvenience in the face of the versatile market.

After deliberate consideration, and encouraged by the successful deployment of Dynamics ERP NAV (originally Navision) of Microsoft at TDMT (Toshiba Digital Media Network Taiwan Corporation), Toshiba decided to adopt Two Tier ERP as its future strategy. In 2009, the company introduced the system to Toshiba Hong Kong, a subsidiary specifying in the sale of household appliances, to replace the incumbent operation management system and thereby to fully adopt the Two Tier ERP strategy.

”For more than 20 years, we have been developing our own ERP system on the IBM platform,” says Zhao Guo-Gang, vice president and director of Toshiba Hong Kong. He points out that the best part of the system is its convenience for end users. Any request submitted to the IT management department can be handled. However, this also puts IT personnel under tremendous stress, as the design, development, testing, launching, as well as data compilation, spread sheet production and all relevant things big and small are in their hands.。

Wang Xue-Fen, senior manager of the IT management department, Toshiba Hong Kong adds that certain function modules of the old system stand apart from each other. Coordination between them requires human intervention, and therefore adding to the burden. For example, after the service module generates income from maintenance service, accounting personnel has to produce a voucher as a basis of coordination with the financial module. This practice worked fine while market competition was not as intense, but now the external environment has drastically changed. Pressure on the end user department to improve performance is escalated, while new demands come rushing in, making it nearly impossible for the IT to meet demands from the operation department.

This shows that the old system is in dire need of upgrade. However, the system has been around for so long that Toshiba Hong Kong employees have developed affection for it. When instruction came from the headquarters in 2009 to convert to Dynamics ERP NAV, there was mixed feelings. On the positive side, the more advanced system will assist the company in quickly adjusting to changes in the market. On the down side, the ERP conversion process still involves risks. Being prudent, Zhao requested for more time from the headquarters to delay the launch date from September 2010 to January 1, 2011.

Fortunately, after the first meeting with the contractor K&S Inform in the first quarter of 2010, Toshiba Hong Kong was relieved most of its concerns, firstly because K&S Inform has a comprehensive plan including establishing To Be procedures, analyzing differences between systems, system construction, user acceptance testing (UAT), data transfer and finally, formal launch. Secondly, K&S Inform fully understands the flexibility of Dynamics ERP NAV. With a quick customized design, requirements of operation and legal compliance can easily be met. This is the difference between Dynamics ERP NAV and other ERP systems. Zhao thus instructed IT and operation departments to build a team of a dozen people to launch the project at all efforts.

”We have dedicated three quarters of a year to ensure the operation of the new system. We conducted two UATs and worked around the clock even on Christmas Eve,” says Zhao. Finally in the end of 2010, the 300,000-400,000 pieces of data were completely moved to the new system, and thus Dynamics ERP NAV was fully launched within the timeframe designated. Since then, the new system has steered the company through monthly and annual account settlements as well as other important challenges.

As the new system went online, Zhao was immediately aware of the benefits it brought about. First, there is no more need for users to request and wait for spread sheets from the IT department. By making use of the Office tools that are connected to the ERP data, they can select data within their authority to produce spread sheets as instructed by their supervisors. As for the supervisors, they can also access the original data corresponding to the sheets by using the Drill Down function, to go into more details on each figure and make more precise business strategies.

Secondly, the role of the IT department has also moved from trivial matter handler to coordinator, bringing its management values to the full potential. Wang said that now, users’ request to modify the system will be analyzed, confirmed and compiled by the IT management department before being submitted to K&S Inform, which will then develop new programs. Her staff at Toshiba can then reserve ample time and efforts for long-term IT strategies for the company.

Thanks to the flexibility of Dynamics ERP NAV, Toshiba Hong Kong was able to quickly establish a complete service module encompassing warranty, contract management, maintenance, task assignment and service center. With service and financial modules closely coordinated, operational data such as income from components or maintenance, the number of slow moving materials and spare parts, can be transferred directly to the accounting system, without relying on human intervention. This is a breakthrough in ERP systems that traditionally “handle only production, purchase, sales and inventory, or accounting.” Client satisfaction has increased along with the enhanced efficiency. In other words, Toshiba Hong Kong was able to fit the old, familiar operation procedures into the new system, while still enjoying considerable ease of use. The benefits witnessed by the company as a whole fully demonstrate that the step towards Two Tier ERP is one wisely taken.